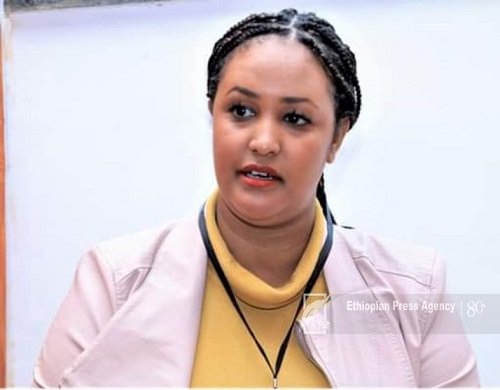 ADDIS ABABA-Members of the visiting Ethiopian Diaspora Peace Delegation said that the Diaspora has been working tirelessly to inspire brothers and sisters back home to replicate their forefathers and mothers commitment to fend off invaders infighting smear campaigners.

Staying with The Ethiopian Herald, the Delegation’s Secretary Eyerusalem Kibret said that social media actors are targeting the young generation that is believed to be easily hijacked by manipulative and misleading contents thereby triggering communal violence.

According to her, in spite of the portrayal of the current generation as unpatriotic and lacking a sense of patriotism, unity, fraternity and commitment to keep their country’s sovereignty by social media, the reality on the ground reflects the otherwise.

“To tackle this negative trend, we have been utilizing social media platforms including WhatsApp and twitter to defend Ethiopia from toxic information and availing timely and verifiable reports to the audience.” Act proactively, the Diaspora has made attempts to narrow the information gap that could lead the public to radicalism and conflict.

Eyerusalem further noted that members of the Ethiopian community in the U.S. have also been fighting the destructive activities of misinformation actors and exposing their lies thereby defending the interest of their country of origin. Local collaborators that are working in tandem with foreign masters have intensified media warfare against the current Ethiopian government and the Diaspora is ready to employ various mechanisms to counter the fake news campaign.

Utilizing social media, particularly twitter campaigns, is the ideal instrument that the Diaspora has employed to inform Ethiopia’s objective reality to global actors that have profound political and economic influences, she added.

“Organizations like Unity for Ethiopia have been educating the youth and societies at grassroots level how to defend their country from Western-backed propaganda machine that envisions a destabilized and weak nation.”